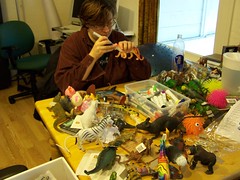 Jett beginning work on the tiger
Originally uploaded by lisaellersf
Lisa and I have friend named Julian who doesn't live too far from us. He's one of those insanely creative mad geniuses and has been working several years on a programming project.
In order to maintain goodwill with all of the professionals who have helped him out through the years with it he will often mail them fun creative baubles he has made.
For a while he was mailing decorated balls but decided to try something different this time around.
He went to a dollar store, bought them out of all their kitchy plastic animals and armed with several bins of paint pens invited several people over to help decorate them.
Never one to miss a party at Meerkat Manor, Lisa and I went over expecting to spend a few hours and instead spent the day painting plastic animals. It was really big fun and it wound up being really therapeutic for me.
This is a shot Lisa snapped as I started work on what would become a rainbow tiger.

(Yes, I'm aware the mad scene with Lady M the blood on her hands is not literally present. Shut up. It's fun.)
Collapse