I checked to see the last time I gave a real update and am horrified at how long it has been. I used to be really good about doing my LJ updates! Maybe my life has settled into so much of a routine I feel like there's not really that much to tell.

Here are some things that I'm sure I haven't blogged about:

Lisa and I went camping 3 or 4 weeks ago at Steep Ravine, (she had some friends rent a cabin and couldn't stay the whole time so we took it the last two days.)
It was really beautiful and it was nice to be in a place where the only noise was the wind and the ocean constantly rolling in.
Anyway, among the other things that are around steep ravine is a "newt pond." We saw a ton of newts and frogs and as we were leaving we got permission from the park ranger to take a few bottles of pond water out.
At home Lisa cleaned a clear glass container and gently put the water in. We were pretty sure we had a few tadpoles as well as a few eggs but decided to take a wait and see approach.
We did have eggs but they must not have been fertilized or somehow got hurt in transport since nothing became of them, but these little black flecks that looked like pepper are now full fledged tadpoles with little eyes and mouths and swim around and generally look very very cute.
Every day it's fun to go and look and see the changes they are undergoing. We think we are starting to see some leg buds forming.

2. I've been drawing a LOT lately.

Between work for my client as well as Red Sparrow I feel like I am in a drawing groove I haven't been in for a very long time. It feels really good.

There was more than a little jury rigging and last minute scrambles in order to get Lisa's class quilt done for this years quilt show. She was up all night trying to put the pieces in the right place before our appointment with the machine quilter and didn't have time to get the border on.

The machine quilting went without a hitch and the lady who owns the machine was delightful and had quilts on her walls that were simply stunning. In the corner were ribbons galore but the lady was really wonderful and modest about her incredible talent. I thought she and my mom would be good friends.

Later while trying to sew the borders on Lisa's machine made some horrible clunking sounds and then just died. In a mad scramble we went to one of the mom's houses who was spearheading the quilting fundraiser and spent the rest of the day there. It was a lot of fun actually.

Lisa went with me to a really fascinating fireside talking about The Book of Mormon by a professor at BYU. It was really interesting when he talked about evidences after evidences but kept throwing out the caveat saying that nobody would ever get baptized because of any of the physical proofs. It's fundamental purpose is to bring people to Christ.

I talked to him after saying that a lot of the elements he had touched on I had already heard...(place names, types of poetry, Alma as a male Jewish name) and most of them seem to corroborate the first part of the book...ie: Before they arrived at the Promised Land.

He made an interesting point that I admit I hadn't really considered. It's a lot easier to track their journey from Jerusalem...because we know where Jerusalem WAS. It's a lot harder trying to tie things together when the story takes place "somewhere in the new world." It's a really BIG place. We have no idea where Zarahemla was but just because we don't know where is it, doesn't mean that it didn't exist.

There are plenty of elements in the Book of Mormon that nay sayers used to use a proofs of the book as a fraud...that now "true believers" use to support their argument that it IS a book of antiquity.

Anyway...I've never really had any doubt as to the spiritual power of the Book of Mormon. When other things about church annoy me...whether it be the culture or that sacrament meeting starts for me at 9:00 AM, the Book of Mormon comforts my soul when I read it.

Went north and saw the Charles Schulz Peanuts museum. It was pretty awesome and really inspiring. I got to meet Jean Schulz (his wife) and see where his office was and noted where his chair had worn a line across the wall when he would push back from his desk.
His desk is on display in the main part of the museum and I gaped a little bit at how WORN out it was. I mentioned this to his wife and she said that he used to joke that he would retire when he had worn it clear through.

I told them that I still had the storyboards for Snoopy vs the Red Baron and I should give it to them for them to deal with since I wasn't sure myself. They told me they'd be delighted to take them, so that would be really cool.

6. The #6 is off observing the primaries in Texas.

7. The weather is beautiful here today.
Trees are in bloom and I have the front door open so Wulfie can sit and look out. He wants to go outside something fierce but I don't trust the neighborhood at all. Too many other cats, too much traffic, too many catfights I hear at night, (I would never allow him outside at night any place that I lived...but it doesn't alleviate any of my worries.) I think he will be happy at the end of March when I go home to Utah for a visit. (I think.)

8. Looking forward to going to Utah.
My niece will be getting baptized at some point the next two months and I'm not going to miss it. I miss the nieces and nephews. I miss my sister. I miss my parents.

9. Got a lot of projects I need to finish.

10. I need a new phone!
I lost mine when Mark and Bryce were visiting. I've searched enough to resign myself to the fact that it's really GONE And not just misplaced.
How bad is it I really want an iPhone?

Doodled around a bit and came up with this. I need help with my coloring but I think the perspective and angle on Spidey is kind of cool.

What do you think sirs? 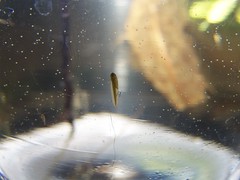 Baby day one
Originally uploaded by lisaellersf
He's probably not a day old...this is just how big he was when we first brought them home. He was the biggest one. 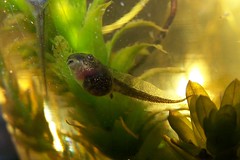 baby week 3
Originally uploaded by lisaellersf
Lisa snapped this picture tonight. They're getting pretty big...at least an inch long. Well...BIGGER than they started!

My older brother introduced me to D&D. It was one of the very first things I did as a Utahn. The day after my family moved from North Carolina to meet up with my older brother who had gone out to Utah earlier with my dad, I sat in my grandma's sewing room as Mark explained the game (I didn't get much of it obviously, since I was 9) and made me my first character...a thief as I recall.
We had a regular game for a while in Farmington and a few of my friends actually played as well. A few months later the big scare "OMG IF YOUR KIDS PLAY D&D THEY'RE GOING TO START WORSHIPPING THE DEVIL AND READ JAY'S JOURNAL AND KILL THEMSELVES AND LOSE THEIR IMMORTAL SOULS!" happened and some of the regulars dropped off...and then the maternal family pressure started and Mark found his own friends to play with...but I loved it. I loved the problem solving and the comraderie with my sister who I think liked it too. She turned out to be the natural leader of the group (she was a magic user) and it was a lot of fun.

I got a little obsessed...but it always gave me somthing to draw, whether it be our adventures or ones I would make up. (I still have a little accordian book I drew in 4th grade "The Hunt for the Pegasus.")

I played again on a regular basis a few years ago when one of my coworkers organized a game and again, just had a really good time.

It seems to be a nearly perfect game. There is room for creativity, personality, problem solving, unexpected events and luck.

Thanks Gary Gygax for the memories.
Collapse