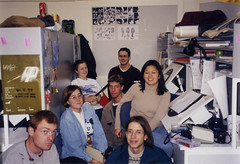 sheridanbuddies_2ndyear_01
Originally uploaded by JettX.
My mom handed me a packet of photos yesterday that held some photos from my art school days.

Just looking at it makes me miss all these guys.

It also makes me TIRED. It was rather late in the evening/early in the morning when this picture was taken. We were always in a state of exhaustion.

I loved that denim Mickey shirt. He later got cut up and turned into quilt blocks.

Okay, so I haven't updated in a heckuva long time.

Things have been super busy.  We just got done with a major milestone deadline last Friday which we, the animators, handled okay.  Of course there was a last minute change to some piece of animation I had done that required a bit of a scramble but nothing too bad.  We have hired two new animators at work which has really eased things up with Nathan and I.  He and I were talking and agreed we both probably *could've* done the work load...but it was SO nice that we didn't have to!
This week he and I went up to the Davis County Fairgrounds where the 9th graders in the school district were having a career fair.  It was too loud and chaotic with a bunch of 14 year olds roaming around but it was a lot of fun to talk to them and show them stuff we had worked on.

Family:  The bridal shower wound up being a most pleasant affair on Saturday.  Annette made out like a bandit.  I'm excited she is joining our family.

All my siblings are doing really cool things this year.  My older brother

fallenpegasus has been working on a really cool programming thing that he's explained to me but I don't quite understand but apparently it has created a bit of an excited buzz among programmer MYSQL types.  He just did his first presentation about it and it went really well.

wyckhurst is getting her business (The Good Mama) up and running and boy THAT'S just been so cool to watch.  She got into cloth diapering a little under 2 years ago and now sells wetbags and wipes and cloth diapers of her own pattern/design.  Like...serious, serious Big Time production.

I look at babies in sposies and two things happen.  1.  I feel SO bad for that baby with that crap against their bottom (seriously, what would YOU rather have against your bum?)  and 2.  The over perfumed smell of disposable diapers make me sick.

(Incidentally, I bought a wetbag and use it for my swim suit and it ROCKS.)

My younger brother Brent, the tattoo artist apparently is going to some tattooing convention dealie-o in Rome.

pheonix_jade is getting married on Tuesday.

Oh, and he's got a presentation tomorrow and asked me if I wouldn't mind doing him two drawings.
One: Arabs getting along.

He tells me it's great I did one of them grabbing/pulling the beard of the other because apparently it's craaaazy offensive so makes the drawing even better/funnier.  I wonder what his instructors will think about it.

Anyway, all my sibs are doing really awesome stuff.  Go them!

I need to get cracking so I can say I've done something cool this year!

Wulfie is great. He's now been given (more or less) his summer clip as well as a bath (he NEEDED it) this last week.

Me, I'm doing pretty well.  I've really stepped it up in karate this week.  We did this killer exercise/game the last two days.  Two people are on the mat.  You can't punch or kick but you have to try to get the other person to the ground on their stomach or back.  The winner stays in the middle and the next person in line comes in.
When we did it on Tuesday I took the line!  Granted it wasn't that big of a class but there were a few brown belts in the lot.  That "*really* tuckers you out.  Just one grapple is tiring...but when it's person after person after person coming after you...10 minutes of that I felt like a wet rag.

When we did it last night I took 5 people and finally got taken out by a 40 year old guy who is like...monkey man strong...and I *still* made him work for it.

That game though soooo kicks your butt.  I'm still feeling the buzzy sore  effects of it.

Tonight we practiced a one legged take down, some arm bar submissions and then some kickboxing stuff.  I always leave feeling RRARRRRGGHHH!!!!

Tomorrow I'm going to the weapons class where they're working with swords!  EEEEE!!! 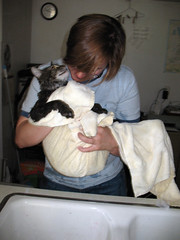 Wulfie_Bath
Originally uploaded by JettX.
I finished (mostly) trimming up Beowulf on Wednesday and then followed up with a bath. He wasn't TOO happy about it but when I picked him out of the tub and wrapped him in a towel he leaned over and gave me a kiss.

I guess I am forgiven.